Life with Fiber and Fiber Arts

As promised in my last post, I have embarked on a stash spelunking, UFO unearthing, start-itis quelling (not really) expedition.  The goal of this endeavor was to take stock of my unfinished projects and encourage and re-inspire me to finish them. I have to say that I was indeed rather encouraged by my findings. Given my penchant for casting on and my “I’m cold, I’d better cast on a sweater” outlook on life*, I expected numbers in the triple digits.

*The general pattern of trying to meet immediate needs by embarking on long term projects, may pop up other places in my life, though certainly not to this extent.

The actual number was exactly 30. (Since I completed the count, I have finished one of the pictured projects…and unearthed another.)

Upon sharing this little fact about myself with people, I have received everything from incredulous smiles and appalled stares to understanding nods of the head, accompanied by an “I figured as much” or “Really, that’s all?!”  Several of my knitting friends (well, one or two) have agreed with me that 30 is a fairly reasonable number. I know plenty of people with easily twice that number of UFO’s. Granted, most of these people are also roughly twice my age, giving me what I assume to be a fairly accurate projection of my fate.

I did a little breakdown of the total. Would you like to see it?

Only 4 of them are pictured here. They range from oldest to newest going left to right. First, a crocheted shrug; I have no idea where the pattern is. Second, a sweater that was actually knit and completed by a friend of my, but which did not actually fit either of us. I have since dismantled it and am reknitting the body and sleeves. Third, a Scout Pullover I began for myself. Note that the body is entirely done. When I was at this point on the original sample, I had it finished by the next day. I could, ostensibly, be wearing this sweater tomorrow. And yet…there is also number four, a simple top-down sweater I started last Fall when I was teaching a First Sweater Class (innocent enough). In my own defense, I do actually knit at least one row on this one every day (I keep it in my purse).

Not Pictured: a purple sweater which also has the body completed and a silk lace top from Knitting Lingerie Style, by Joan McGowan Michael, a master of sultry garment shaping.

I had hoped to have this one done for Valentine’s Day (two years ago), but I was busy counting my projects.

Each of these socks has at least a couple of hours of knitting invested in them already.

Two of these have since been torn out and re-cast on as a different kind of shawl, which, for the record, DOES NOT COUNT as casting on a new project. It is just repurposing a previous cast on.

Three of these four items are intended for my beloved, long-suffering husband, which might make me feel a little guilty, were I not also knitting him this: 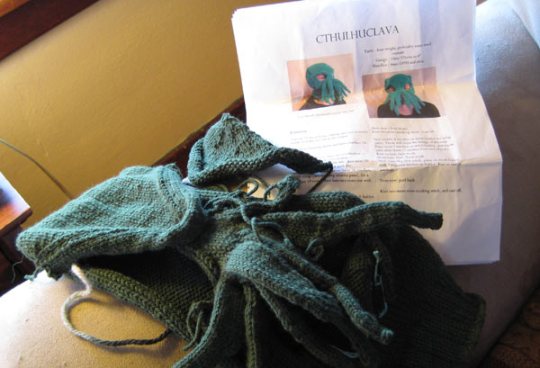 In case you couldn’t tell, it is a Cthulhuclava, designed by Anne-Marie Dunbar. I wouldn’t necessarily recommend it for new knitters, but if you are ever looking for an exercise in extremely clever shaping, this would be the pattern. It is actually next on my list of must-finish, which is turning out to require an immense amount of self control, seeing as I also have this project staring accusingly at me. 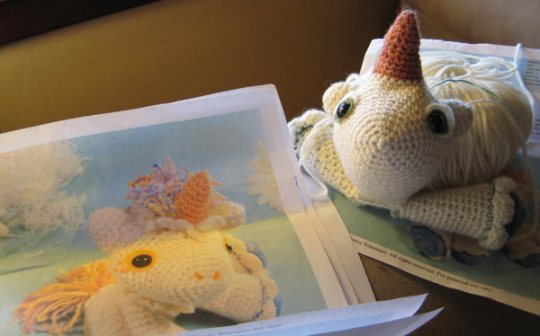 In fact, quite literally staring. I know what you’re saying, “Hannah, how can you just leave it there? It has a face!”  Well, sometimes being a compulsive project starter requires me to harden my heart and just look away.

The oldest UFO I unearthed was a (not yet) Felted Clog. 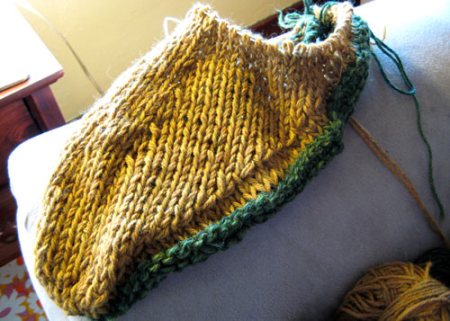 Anyone who has ever knit the Fiber Trends Felt Clog pattern will look at this picture and know that this clog is just about an hour away from being done and ready to felt. Its mate is done and, in fact, felted, and has been for about 4 years (yes, I do know where it is; I found it while I was digging). I would sit right down and do it now, except that this project is even closer to being done.

It’s a linen stitch headband. All I need to do is finish the button loops and sew on the buttons. That’s it. Minutes. (Since this picture was taken, I have actually finished it; I have also unearthed another UFO, so the number is still 30).

The prize for the furthest-from-being-done goes to my Little Black Dress. It is currently, ahem, very little.

In addition, I have an unfinished baby blanket (one square done), baby sweater (ribbing and cable set up done), baby bootie (one completed, just needs seaming), a pre-felted bag and two mitts. The mitts are actually using the same pattern, but using 2 different yarns and with 2 different intended recipients. Oddly enough, I stopped working on them in precisely the same place.

In the interest of full disclosure, I chose not to count pairs of socks, one of which is completely done and the second of which has not yet been started (I may be an optimist, but even I have my limits), and swatches that I have done for design ideas (that’s work, so it doesn’t count).

Also, during the time it took to gather up, count and photograph all these projects, I may have begun and finished (finished, so it doesn’t count) another project. 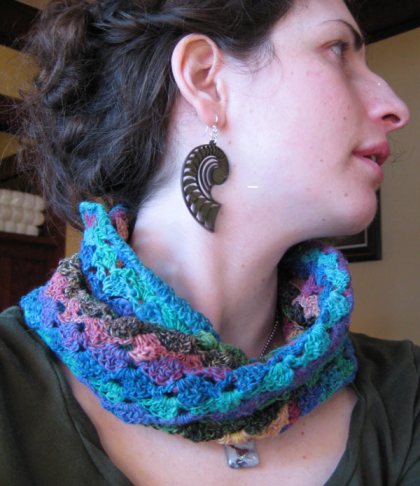 So there we go. If we were to separate the world of knitters into two types, those who knit because they want to eventually possess a specific thing (product knitters) and those who just knit (process knitters), I would apparently fall into the latter category. It’s not that I don’t want to have each one of these projects that I have started. It’s just that I don’t seem to want it very badly or for very long. I consider myself a fairly steadfast person, so it may be that I have concentrated all the fickleness in my character to this one pursuit. My husband, with whom I have happily spent the last 13 years of my life, is quite satisfied with this arrangement.

When I brought up my UFOs with my parents, my mother (who does not share my compulsion at all and has a respectable 4 or 5 works in progress, none of which are more than a few months old, I’m sure) reminded me about Grammy. We’re pretty sure that Grammy’s compulsive yarn buying (I had never actually seen the walls of her guest bedroom because they were piled up with yarn) was her way of seeking immortality. How could she possibly ever die if she had so much yarn to knit?

I don’t really think that having an unlimited supply of UFO’s will keep me alive forever, but it should, at least, keep me from ever being bored. If I ever feel boredom sneaking up on my, I can just pull up this post and be re-inspired. If I am ever having a day when I feel miserably unproductive, I can just pull out one of those oh-so-close projects and finish it up for a quick, easy feeling of accomplishment. See? It serves its purpose, and I am not at all ashamed.

One Response to “Nothing to be Ashamed Of”