Life with Fiber and Fiber Arts

Well, I have a confession to make.  In all my life, I have never kept a journal, diary or penpal for more than two weeks. I feel that this doesn’t bode well for my blogging career.  I’m willing to give it a go, though.

Here is what I have been doing while not writing my blog:

I have been making a cable chart…

Then tearing it out.

I tried inserting it into a hat…

Then tore it out again.

I repeated this process about 5 times, each time getting a little farther along on the hat.  Ironically, the goal of this exercise was to create a simple, one skein hat pattern to share with all my wonderful friends out there and to celebrate the arrival of the new Cascade 128 Superwash (that is, a bulky weight superwash wool).  Well, the yarn is no longer newly arrived, but I did finally come up with a simple, cabled, one skein hat pattern.  I liked it so much, in fact, that I knit it up again in another color. Now, I have only to write it up and put it in a sharable format.  I have complete faith that I can accomplish this at least in the time it takes me to write another blog post. Hmm…

As for the yarn, I have to commend, above all,  its sturdiness.  As I said above, this hat was knit and unknit numerous times while retaining its structural integrity and pleasing texture. I love it. Plus, it comes in all my favorite colors (at the top-Turtle and immediately above-Pacific).

In between drafts of my hat, I found myself in dire need of a feeling of accomplishment. Thankfully, there were several skeins of yarn that had escaped my detection during the initial packing stages.  One of these sneaky beasts became a scarf. 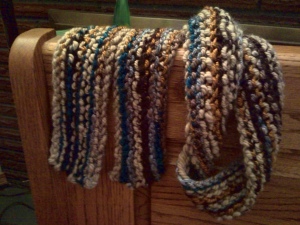 Ok. So it’s not my best work. The yarn was originally an attempt at self-striping handspun, however it turned out that these particular stripes were totally lacking in subtlety or harmony. It was very quick, though.  In the future, I intend to spend some portion of my “immense amounts of free time” improving my spinning and fiber blendig skills. Don’t worry, you will all hear about it.